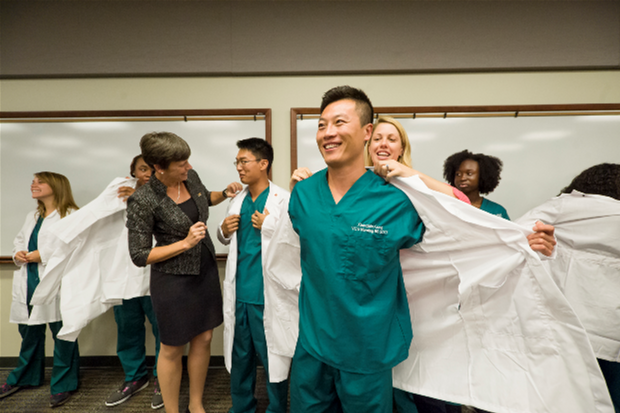 About 60 new undergraduate Virginia Commonwealth University School of Nursing students participated on Wednesday in the school’s first-ever white coat ceremony, a rite of passage that welcomes students into medical professions.

“On one level the white coat symbolizes the science of nursing and the commitment to providing quality, safe, compassionate, patient-centered care, but on another level this white coat symbolizes a transformation that is about to happen to each and every one of you,” Giddens said. “Starting tonight, the white coat represents you as a health care professional. You represent nursing and you represent the VCU School of Nursing.”

After Giddens’ remarks, faculty, staff and alumni helped each student don his or her white coat for the first time.

“The white coat ceremony was a physical manifestation of our place and acceptance into the nursing profession,” said Aprille Singson, one of the nursing students who participated on Wednesday. “It really legitimized the importance of what we’re all going to do in the future.”

VCU was one of 100 schools of nursing across the country to be selected to receive funding support for the ceremony from the American Association of Colleges of Nursing and The Arnold P. Gold Foundation.

White coat ceremonies have occurred at medical schools for more than 20 years, but this new collaboration between APGF and AACN marks the first time a coordinated effort has been developed to offer similar events at schools of nursing.

The event’s expansion into schools of nursing can be explained by the nursing profession’s advancement over the years.

“Since our school was founded more than 120 years ago, nurses have gone from a nearly exclusive focus on bedside care to positions in the classroom, the laboratory, legislative chambers and the board room,” Giddens said.

Rose Kepnang, a student who participated in the ceremony, agreed.

“After the white coat ceremony I feel a stronger sense of pride and appreciation for nursing as a science profession,” she said. “Although nursing may be viewed as one of the most ethical professions out there, it isn't typically recognized as a scientific profession, even though, when it boils down to it, nursing has developed into the career it is today because of scientific research and discoveries.”

The white coat ceremony was combined with the school’s annual lamp lighting ceremony.

The lamp is a symbol rooted in the story of Florence Nightingale, who became known for carrying a lamp during her night rounds tending to wounded Crimean War soldiers.

It’s still this influence that inspires many nurses.

“The thing I look forward to most about being a registered nurse is the fact that I will be able to touch people's lives in a way that no other professions out there can,” Kepnang said. “I've always been an individual who had the spirit of wanting to help the world … We need strong-minded and dedicated individuals to look out for others, especially the sick and vulnerable. I look forward to taking on this challenging task.”