A Scholar and Leader 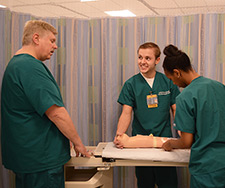 At age 18, many college-bound students are still deciding on their majors. While still in high school, Johnathan Ramey already knew he would pursue nursing after shadowing his aunt, Kimberly Manning, RN-CNIII, at the Carilion Roanoke Memorial Hospital in Roanoke, Va.

Manning often discussed the nursing field with her nephew. She offered him the chance to shadow her in the Progressive Care Unit (PCU), an experience that triggered his passion for nursing.

“I loved the type of interaction and hands-on involvement nurses had with their patients,” said Ramey, who graduated in 2011 with honors as valedictorian at William Byrd High School. “Getting the chance to experience that while working at Roanoke Memorial solidified the idea that nursing was the right career path for me.”

Ramey knew he wanted go to college, but it was a difficult decision to leave Roanoke, Va. He is the youngest of three kids, the first to pursue a college degree and the first in his family to leave the Roanoke area. But he didn’t let those factors deter him. He decided to attend VCU knowing that he had guaranteed admission to the nursing program through enrollment in the Honors College.

“I’m really glad that I made the decision to go to VCU,” Ramey said. “I feel like I’ve had incredible opportunities through my involvement with the School of Nursing.  The faculty and students have helped me grow to be both a better student and person.”

Ramey is already exceling as a nursing student, which has led to him receiving several scholarships. As an incoming freshman, he was awarded the merit-based 2011 Dean’s Scholarship, which was equal to the cost of half of in-state tuition and fees. He was also awarded two nursing scholarships in 2012: the Hartsell and Koslofski Scholarship, established by Ann M. Mueller to help educate more nurses, and the Mary Elizabeth Anderson Memorial Scholarship, created by Henry Anderson to honor his sister’s commitment to the care of others during her nursing career. Through the Honors College, Ramey received the Marcus and Carole Weinstein Honors Scholarship, a $2,000 scholarship awarded to honors students of exceptional promise in any area of study, in 2011 and 2013.  In 2012, he earned the Jay and Sondra Weinberg Undergraduate Scholarship, a $3,000 scholarship awarded to honors students in good standing, progressing satisfactorily toward graduating with University Honors.

Ramey’s commitment to nursing excellence is making an impression throughout the School of Nursing.

“Johnathan has been such a joy to work with in the Clinical Learning Center - he is mature, professional and I know that students and faculty alike love working with him,” said Genevieve Beaird, RN (B.S.  ‘09/N, M.S. ‘11/N), assistant director of the Clinical Learning Center. “Johnathan represents many of the qualities that we would want to see in our future nursing workforce.”

While majoring in nursing, Ramey is also pursuing a minor in both chemistry and Spanish. For many years he thought he would become a Spanish teacher, but the School of Nursing provided the perfect avenue for him to combine his love of Spanish with health care. Ramey said he plans to be fluent by the time he graduates so language barriers won’t impact his ability to provide care for patients. He is even in the process of applying for a study abroad program in Mexico this summer.

In the meantime, Ramey juggles being a full-time student with working part time and serving as a student leader. He is class director for the Class of 2015, serving as a liaison between his nursing class and the school’s leadership.
“I’ve had the opportunity to meet and speak with people I never would have dreamed of meeting,” Ramey said.

He also represents the School of Nursing as a member of the Medical College of Virginia Student Government Association (MCV SGA), where he serves as treasurer, the only nursing student to serve on the executive board in recent history.

In addition to roles as the class director, MCV SGA treasurer and a full time student, Ramey works as a shelving assistant at the James Branch Cabell library and a student ambassador in the School of Nursing’s Clinical Learning Center, where he helps nursing students practice their medical skills. Although he has little free time, Ramey has no regrets.

“The School of Nursing has given me all the tools and opportunities I need to be successful,” said Ramey, who aspires to work in an intensive care unit for at least a year before applying to VCU’s graduate program in nurse anesthesia.

“Leaving home and attending VCU was a life-changing decision and I’m looking forward to what the rest of this semester and my senior year have in store,” he said.