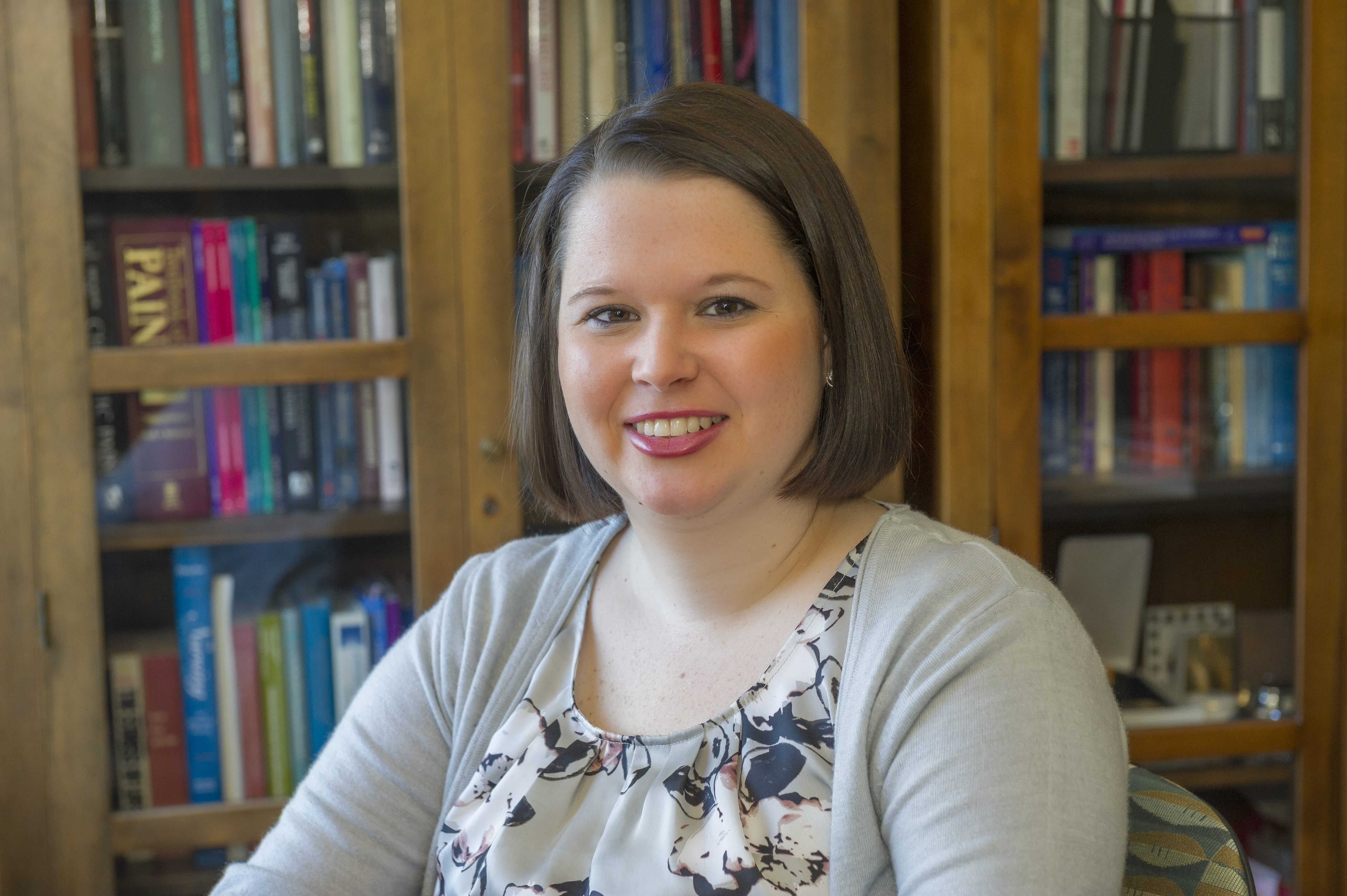 Christina Wilson, RN, WHNP-BC (M.S.'13), realized she wanted to be a nurse while attending Nottoway High School in Crewe, Virginia after recalling a health scare she experienced at the age of nine.

She spent about 14 hours in a hospital to have cyst removal surgery.

"Doctors initially thought it was cancer," Wilson said, pointing to a scar just below her neck. "They had to remove it because it would have blocked my airway."

The entire experience prompted the thought of nursing as a career.

"I was thinking about the way the nurses treated me and my family," she said. "I wanted to make that kind of impact on patients as well."

Since then, Wilson, a Ph.D. student at the VCU School of Nursing, has spent her nursing career trying to make a difference in the lives of women. Her interest in women's health began while she pursued a B.S. in nursing at the UVA School of Nursing. Tara Albrecht, Ph.D., RN, ACNP-BC, assistant professor at VCU, taught Wilson at UVA and introduced her to patients with gynecologic cancer while she worked at the UVA Health System.

After completing her bachelor's degree, Wilson obtained a position as a registered nurse in acute oncology at VCU Health in 2011. She then enrolled in the master's degree program, women's health nurse practitioner concentration at the VCU School of Nursing and realized her true calling in a specialized aspect of women's health.

"I had patients with body issues -- they refused to look in a mirror because they didn't look how they used to," Wilson said. " I started looking for literature on how women with gynecologic cancer can improve their body image, but there wasn't anything."

Wilson said she shared her concern with Jo Robins, Ph.D., RN, ANP-BC, AHN-C, FAANP, associate professor and director of the Ph.D. program at the VCU School of Nursing, who advised her to "make a difference in a clinical setting" or "try to impact patients with research." Heeding that advice, Wilson decided to pursue a Ph.D. in nursing at VCU, which would allow her to explore the biobehavioral aspects of gynecologic cancer.

"The passion for making a difference in women experiencing gynecological cancer was sparked when she was a master's program and women's health nurse practitioner student, and since becoming a doctoral student she has wholeheartedly immersed herself in developing the knowledge and skills that will ensure that she will contribute significantly to health and health outcomes in this population," Robins said.

Wilson was recently selected for the highly competitive Jonas Nurse Leader Scholars Program of the Jonas Center for Nursing and Veterans Healthcare. She is one of 425 doctoral students nationwide chosen for the 2016-18 cohort.

The mission of the Jonas Scholar program is to increase the number of doctorally prepared faculty available to teach in nursing schools nationwide and the number of nurse leaders providing direct patient care and filling roles as clinical faculty. Sponsored by the Jonas Center for Nursing and Veterans Healthcare, the program provides financial assistance, leadership development and networking support to expand the pipeline of future nurse faculty and advanced practice nurses.

As a Jonas Scholar, Wilson will receive a $10,000 scholarship, matched by the VCU School of Nursing, to support her doctoral studies.

Wilson also achieved another milestone recently - she presented her first poster at a major nursing conference. Wilson worked with Deborah McGuire, Ph.D., RN, FAAN, associate dean of research and the Florence E. Elliott Professor, and Leigh Small, Ph.D., RN, CPNP-PC, FNAP, FAANP, FAAN, associate professor and chair of the Department of Adult Health and Nursing Systems, to prepare an abstract for the poster, titled "Body Image, Sexual Dysfunction and Sexuality as Predictors of Physical and Psychological Issues Related to Gynecologic Cancer." She presented the poster, which was based on a review she did while in Small's Ph.D. class, at the 2016 Southern Nursing Research Society annual conference.

McGuire described Wilson as "the ideal Ph.D. student" and said she is "bright, motivated and incredibly enthusiastic."

"She embraces learning and professional experiences with gusto, soaks up opportunities like a sponge and constantly seeks to improve her knowledge and skills," McGuire said. "It's a pleasure to work with her because she is exploring some important clinical research ideas and is very responsive to mentoring and support. Notably, she is highly appreciative of opportunities and recognizes the excellent environment we provide here to our Ph.D. students."

Wilson said the opportunity to work with mentors like McGuire, Albrecht and Robins is among the factors that drew her to the the VCU School of Nursing's Ph.D. program.

"The VCU School of Nursing has numerous outstanding faculty who could mentor me in this area of research," she said. "I also liked the proximity of the school, its highly ranked graduate program and the convenient online format for the Ph.D. program."

The recipient of the Waverly Cole Scholarship for the past two years, Wilson works as a VCU adjunct faculty member, teaching clinical aspects of two undergraduate nursing courses, while pursing her Ph.D. full time. She also helps recruit and follow up with patients involved in Albrecht's pilot project, “Physical Activity as a Self-management Approach to Improve Health Outcomes in Acute Myeloid Leukemia.”

A member of the Oncology Nursing Society, Virginia Council of Nurse Practitioners and SNRS, Wilson volunteers in her spare time at Crossover Clinic in Henrico County twice per month.

"This opportunity allows me to see women and promote cervical cancer screening," she said. "My hope is to help prevent or detect it early."