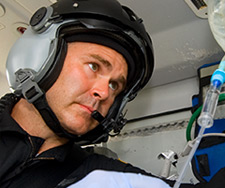 “Until you get into nursing, you don’t realize how many different job opportunities there are.”

Chris Stevenson’s sense of adventure pushed him to take leaps throughout his path in emergency medicine.

Stevenson started his career in the intensive care unit, but when an opening came up for a flight nurse with LifeEvac, Virginia Commonwealth University’s medical helicopter, he decided to change directions.

“Flight nurses operate on patient guidelines and we have some skills that nurses typically don’t do – they’re typically paramedic skills,” he said. “I didn’t know anything about nursing until I was a volunteer EMT and I started interacting with them in the emergency department. It was always the nurses that seemed to run the show and that impressed me.”

The high-acuity, independent practice turned out to be a natural fit and Stevenson was later elevated to the chief flight nurse position.

“Being the chief flight nurse is an exciting job,” he said. “We deal with all different patient populations and all different age groups. I can be at our base in Dinwiddie in the morning, Norfolk at lunch time, Lynchburg at dinner time and North Carolina at midnight.”

Despite the thrill of being a flight nurse, Stevenson was still on the lookout for new opportunities in the field. When one of his staff members returned to nursing school and put her flight nurse skills to use in cardiac surgery, he recognized the range of experiences he could have in the field. Stevenson soon enrolled in the VCU School of Nursing’s adult health acute care nurse practitioner program.

“Until you get into nursing, you don’t realize how many different job opportunities there are,” he said.

Stevenson knew that his ability to trust his instincts and take risks that had always benefited him in the air would come in handy during his nursing education, but he also recognized those same characteristics in many of his classmates. In particular, he noticed a growing number of men taking a similar leap and entering a field that has traditionally attracted more women.

“With men, it seems to be much more a second career than a first career,” he said. “I have some nurses who work for me who were welders and I have nurses that were in the Navy as corpsmen or were paramedics in the past. I think it brings a lot of diversity when you have people who come from other professions or industries and bring a different perspective.”

For now, Stevenson has discovered that his adventures in nursing school aren’t just preparing him for the future. He’s noticed a growing understanding of patients’ medical history and how that insight impacts his ability to treat them on the fly.

“As I go through more and more course work in the graduate program, it’s giving me the big picture of the patient that I usually only had a snapshot of,” he said. “I have a greater ability to really understand where they are in their medical history and what their underlying problems might be. My track will certainly make me a more well-rounded flight nurse, but also better manage and educate my staff.”