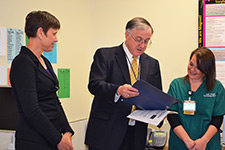 “I want to pass on what I have been learning in this country about nursing and research so that nursing science continues to move forward.”

Emily Dowell, an accelerated bachelor’s degree student, has already had the opportunity to make a difference in someone’s life.

Dowell demonstrated exceptional attention to detail during her recent clinicals on the acute care medicine floor at the VCU Critical Care Hospital. She pre-assessed a patient the day before she was scheduled for a new peripherally inserted central catheter (PICC) and requested to sit in and observe the procedure. The medical team began preparing a surgical placement with the drug heparin, but Dowell remembered learning in her pre-assessment that the patient had experienced a severe allergic reaction to heparin in the past. Though she was initially worried about speaking up against what the medical team was doing, Dowell voiced her concerns and the team verified that she was right and removed the drug from the room.

Dowell’s attention to detail led to her being awarded the VCU Health System (VCUHS) Safety Star this spring.

“Your actions show that it’s okay to speak up no matter where you are on the power grid,” said John F. Duval, chief executive officer of VCU Health System hospitals.  “You listened to the voice in your head and your actions made a contribution to the patient and enabled the hospital to do even better work.”

“The work you do really makes a difference,” Jean Giddens, Ph.D., RN, FAAN, dean and professor of the School of Nursing, told Dowell at the award ceremony. “You set such a great example for other nurses to follow.”

Dowell said that her clinical instructors at the School of Nursing always encourage her to ask questions if she is unsure of something, so she used their advice to speak up in that critical moment.

“It’s not easy to speak up as a student when you don’t know if it’s your place to call something out,” she said. “But I decided that I would rather say something and risk being wrong than not say anything and watch something bad happen to the patient.”
Even before she proved her skills that day at the hospital, Dowell seemed destined to work in health care. She grew up in Chesapeake, Va., hearing stories of her mother’s work as a nurse midwife and of her late grandmother’s 50 years of experience as a nurse. Dowell attended Virginia Tech and earned a bachelor’s degree in biology and psychology in 2010 with the intention of becoming a doctor. She took the Medical College Admission Test (MCAT) and began applying for medical schools, but knew this was not the right career path for her.

After earning her undergraduate degree, Dowell worked at a local Y.M.C.A and volunteered at hospitals on her days off. Though she knew she didn’t want to become a doctor, she maintained a love of the medical field and chose to pursue nursing instead.

“VCU was the only school I applied to,” said Dowell. “I loved that the School of Nursing has an accelerated nursing program and that the VCU Medical Center has a level one trauma center. I felt like I would have more opportunities by attending this school.”

Dowell is also making an impression in the classroom where she is excelling as a student.

“Emily is in my adult health nursing class and a pleasure to teach because she understands the role of the nurse and the hard work necessary to be successful,” said Tracye Proffitt, M.S., RN, CCRN, clinical instructor in the Department of Adult Health and Nursing Systems. “She is eager to learn, conscientious, and takes initiative. I am so proud of her attention to detail and questioning attitude that prevented an adverse reaction.”

Outside of her role as a student, Dowell is a care partner on the Gumenick Suites at the VCU Medical Center where she assists nurses with patient care. Dowell is also a member of the Student Nurses’ Association and a student ambassador. As a student ambassador, Dowell leads tours for potential future nursing students and assists groups of middle school students with simulation nursing experiences in the School of Nursing’s Clinical Learning Center.

Dowell said after she graduates she plans to work a few years in a hospital setting and then further her education. She said her positive experience with clinical instructors and professors at the School of Nursing have solidified her decision to eventually return to VCU.

“Everyone at the School of Nursing wants you to be the best nurse you can be,” said Dowell. “I’ve had so much support here that I can’t imagine going anywhere else for my next degree.”