Class of 2021: Laura Stevens is supporting pregnant and postpartum individuals through research 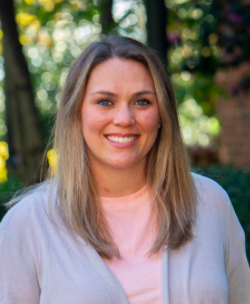 Laura Stevens discovered she was interested in women’s health and childbirth during her service in the United States Army. But it wasn’t until she began working in the lab of Virginia Commonwealth University researcher Patricia Kinser, Ph.D., that she was able to connect that interest with research.

Stevens, who was born in Pittsburgh, Pennsylvania, and will graduate this month with an Accelerated B.S. in Nursing degree from the VCU School of Nursing, has been helping Kinser  test an app for pregnant and postpartum individuals to see if self-management of their pregnancy has an effect on perinatal and postpartum mood disorder.

Kinser is an endowed professor at the School of Nursing and co-director of perinatal mental health research at the VCU Institute for Women’s Health. Her lab is in the midst of a five-year study focusing on an app-based self-management program called Mamma Mia for preventing and reducing perinatal depressive symptoms.

The mobile app could benefit those who are pregnant and postpartum by helping prevent the development of symptoms or helping them cope with their current depressive symptoms. Mamma Mia is a self-guided program that people will begin early in their pregnancy and complete by six months postpartum. One of the groups in the trial receives additional human support. Stevens, who has been a part of the project since January, is the person that contacts people in that group to offer that extra help.

Stevens is also working with Kinser on the COVID-19 and Perinatal Experiences (COPE) Study, which is looking at the resilience of pregnant and postpartum individuals in crisis situations.

She is grateful to be working on research as an undergraduate.

“That’s unique. A lot of undergraduates at other institutions don’t get that experience,” she said. “Dr. Kinser has been an amazing mentor, and I have learned a lot from her.”

Prior to coming to VCU, Stevens earned a bachelor’s degree in international relations and diplomacy from Seton Hall University and later served in the Army, where she spent four years working as an X-ray technician.

Stevens, 33 and the mother of three, became interested in helping women with childbirth after giving birth with Army midwives.

“I began working as a doula after the military,” she said. “I taught childbirth education. I worked for a birthing center before I joined a consulting firm to work on global health care projects.”

Her work at the firm was not as fulfilling as she had hoped so she decided to concentrate more on the bedside and less on the policy side of health care. She enrolled in VCU’s accelerated nursing program so she could get her degree as quickly as possible without sacrificing a quality education, she said.

After graduation, she wants to become a midwife and also continue doing research.

“I want to continue to work with and improve maternal health in this country. I want to look at countries that have the best outcomes and study those places to see how we can implement those practices into our health care system,” she said.

Stevens is planning to apply for the biobehavioral B.S. to Ph.D. in Nursing program at VCU.

“I enjoy being able to advocate for people’s needs and best interests and see that they get the care they need,” she said. “I want to be the person to provide the care to get them through a hard time. It makes me feel good to know that I can have a positive influence on people’s health and their interactions within the health care system.”