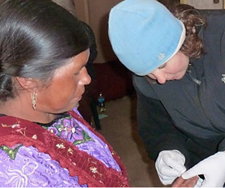 Karen Mace, N '11, conducts a glucose screening during a Nursing Students Without Borders trip to the highland villages of Guatemala.

Nursing Students Without Borders, a non-profit organization of VCU students, routinely conducts health screenings and shares prevention information with vulnerable populations locally and internationally. On a 10-day trip to the rural highlands of Guatemala in January 2012, NSWB members put their nursing skills to use, along with some physical labor to help transform the lives of five families.

The students participated in building vented stoves for five households to prevent serious respiratory problems commonly associated with cooking on open fires in the kitchen. Working in pairs with the women of each family, they helped to mix the mortar, measure dimensions and lay the concrete blocks in layers.

Danielle Viggiani, a sophomore and president of NSWB, said a vented stove allows for greatly reduced cooking time and a properly ventilated kitchen area. Upper respiratory infection is a common cause of mortality among the villagers due to toxic smoke from open fires, she said.

"The women were so incredibly grateful it brought some of us to tears," Viggiani said. "It was amazing to be able to have formed such a bond with them despite the language barrier."

In addition to working with the five families, Viggiani and fellow NSWB members learned about Mayan health practices and shared preventive medicine during their journey to various Guatemalan villages. At one village 11,000 feet in elevation, students engaged in a dynamic discussion with midwives and lay health promoters about how to prevent dehydration in children, and how to recognize and treat early symptoms. At another village, students conducted health lectures and screenings, and filled out health passports for residents.

The trip was organized through a partnership with the Highland Support Project, an organization that works with indigenous communities in Guatemala to address critical social, environmental and economic issues. NSWB members sponsored their own travel through group and individual fund-raisers.

Fay Parpart, R.N., M.S., ANP-BC, AACRN, VCU assistant professor in the Family and Community Health Nursing Department, who accompanied the students to Guatemala, said the Highland Support Project representatives were very grateful for VCU's participation in the trip. They cited an example of the students' impact -- while testing blood glucose levels, they identified a woman who was in the early stages of developing diabetes. The woman will now undergo a series of doctor's visits.

"The trip offered our students the opportunity to develop health promotion strategies for lay health promoters, midwives and community members while assuring cultural appropriateness and availability of resources in rural Guatemala," Parpart said. "The students were able to use clinical knowledge they had learned in various nursing courses and clinicals."

Viggiani said the experience was unforgettable. "I don't think I will ever meet a more amazing group of women than those than those that joined me on this trip, those that made this trip possible and those I met in Guatemala working hard to empower their communities," she said.