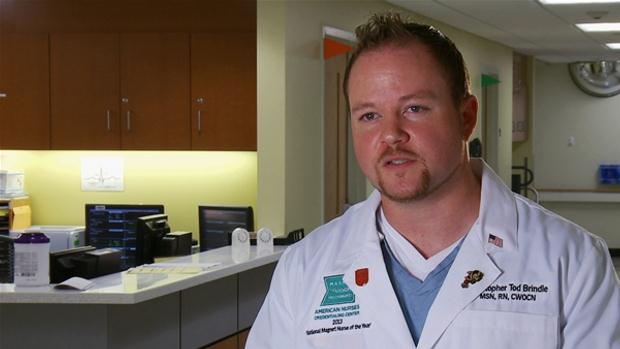 “We recognize that each and every day we impact somebody’s life and make it a little bit better.”

While working as a nurse in Colorado, Tod Brindle witnessed something in medicine he had never seen before.

It involved the case of a trauma patient, who, after weeks of ongoing attention and unsuccessful treatments from surgeons and physicians, began treatment with a specialized nurse and finally started showing improvement. The nurse was a wound care specialist better equipped than even the doctors to heal the patient’s injuries.

“It was the first time I had seen a physician team defer to a nurse, and it intrigued me,” Brindle said.

That one case has inspired an accomplished career in wound care continence nursing and led to Brindle’s transformative and widely respected work in the field – work that most recently led to the Virginia Commonwealth University Medical Center nurse’s selection as one of five nurses nationwide to receive the American Nurses Credentialing Center's (ANCC) National Magnet Nurse of the Year® award for 2013.

A prestigious designation, this annual award recognizes outstanding contributions of clinical nurses for innovation, consultation, leadership and professional risk-taking. Brindle, an alumnus of the VCU School of Nursing, was chosen in the Exemplary Professional Practice category for his contributions of transformative ways to improve patient care quality.

Brindle now provides the kind of diligent, proficient patient care he witnessed in Colorado on a daily basis with his patients at VCU Medical Center.

“I don’t know what I would have done without him,” said Cathy Van Drew, a patient of Brindle’s for nearly two years. “He has changed my life.”

For Brindle, the opportunity to have that kind of impact on patients was what drew him to nursing. He started as a physical therapy student, but after rounding and volunteering, realized he wanted to be more involved in patient care. Coming from a long line of nurses in his family, the switch was easy for him.

Brindle finished his undergraduate education in nursing at the Ohio State University in 2001 and worked as a traveling nurse for several years. After his work in Colorado, he came to VCU Medical Center in 2005 and worked the night shift in cardiac surgery.

Still intrigued by the case in Colorado, Brindle looked into becoming a wound care continence nurse and attended the Enterostomal Therapy School at Cleveland Clinic in 2006. That same year, he earned his board certification from the Wound Ostomy and Continence Nursing Certification Board as a certified wound ostomy continence nurse (CWOCN).

The time was right for Brindle at VCU, which had an opening for a wound care nurse to join its team, and he’s been there ever since. It’s a role he enjoys and takes very seriously.

“The wound care certification expects you to be independent and autonomous,” he said. “Your role is coming up with creative solutions in improving quality of life and patient outcomes. It’s a responsibility that starts and stops with us.”

He is on a team of seven wound care nurses at VCU Medical Center who work with patients all over the hospital, often in the operating room. The team sees patients in every unit and works with approximately 20 percent of the hospital’s inpatient census.

Every wound care team member can treat any patient, but each has their own niche specialty. Brindle specializes in complex open abdominal wounds and the management in fistulas, abnormal connections between two organs or open abdominal wounds. In addition to serving the surgical trauma Intensive Care Unit (ICU), cardiac surgery ICU and Evan Haynes Burn Center, he also is the nurse clinician for the wound care team, developing and enforcing the evidence-based practice and clinical competency of the team.

“With some of these conditions, there is no evidence-based practice,” Brindle said.

That’s something he has set out to change.

We recognize that each and every day we impact somebody’s life and make it a little bit better.

In 2012, Brindle, who earned his master’s degree in nursing administration and leadership from the VCU School of Nursing two years ago, published research with Jacob Wegelin, Ph.D., assistant professor in the Department of Biostatistics in the School of Medicine, on new ways of dressing pressure ulcers, or bed sores. That research has not only changed clinical nursing practices at VCU Medical Center, but also has been adopted nationally and internationally by more than 1,100 hospitals in 10 countries.

His work led to a hospitalwide practice change at VCU to prevent pressure ulcers in the ICU, resulting in a reduction of Healthcare Acquired Pressure Ulcer (HAPU) rates from 8 percent to 2.4 percent. In addition, he developed an evidence-based intervention for patients with hemodynamic instability, the body’s inability to maintain blood pressure or adequate heart function, and groundbreaking techniques to enhance care of patients with fistulas.

These accomplishments made him a shoo-in for a Magnet® award nomination, which came from his supervisor, Susan Creehan.

“It’s the responsibility of every leader to provide the resources to help open doors for the members of your team to be successful at what they’re passionate about,” said Creehan, wound care team program manager at VCU Medical Center. “Tod’s passion is palpable.

“He’s just the whole package.  He’s brilliant, his clinical expertise (is) unmatched and his inquisitive mind to want to create new knowledge made my job easy. But underneath all of that is a sincerely kind, humble and fun team member, and a fabulous dad, husband and son. Every role that he’s in, he excels.”

His teammates agree. Patrick Alridge, former surgery trauma ICU nurse, said Brindle is the one who got him interested in wound care. Alridge saw all of the work and research Brindle was doing, and it piqued his interest in wound care so much that he joined the team two years ago.

“Tod’s been, for the whole team, an incredible mentor with his knowledge and willingness to share what he knows and learns,” Alridge said. “We are lucky to have him as our clinician.

“We’ve got our own superstar wound care nurse right here at VCU,” he added. “If you consider what he’s already contributed, for someone his age, he’s got years and decades ahead of him – the sky’s the limit for him.”

The sentiments of his clinical teammates are echoed by patients such as Van Drew.

A nurse herself, Van Drew says she knows good nursing practice when she sees it, and she sees it all the time with Brindle.

“He puts his heart in his job,” she said. “He is so worthy of being a Magnet award winner. I’m just so pleased about that.”

Van Drew has suffered from ischemic colitis since 2001. Over time the condition has caused her colon to disintegrate. She’s spent months in and out of hospitals, undergone multiple surgeries at various facilities, but she has a special place in her heart for Brindle’s unique care.

“It was Tod that got me and my family through dealing with that,” she said. “He worked magic, basically.”

Van Drew underwent complex wound care at VCU Medical Center in 2012 and began working with Brindle every day when she developed fistulas from her bowel obstruction repair.  After numerous caregivers could not properly fit her drainage bags to stay on for any length of time, Brindle engineered a setup that held the bag for days at a time, and he taught her husband and family members how to properly put it on so that it would stay.

“He was always available to us,” Van Drew said. “We could call or text him with questions, and he would get right back to us and help us. He is such a great teacher – very patient and readily available.”

Even when she went for an operation in Baltimore, Brindle kept in touch with her and even spoke to her nurses in order to help train them on how he fitted her dressings and bags. He also responded to her texts when he was traveling abroad to speak at a conference.

“It was a comfort for me to know that he was so available to me,” she said. “He’s part of our family now.”

It is this kind of thorough care, coupled with his impactful research, that earned Brindle the coveted Magnet® award. In addition to Brindle, four other recipients were recognized for their achievements during the ANCC National Magnet Conference® from Oct. 2-4 in Orlando.

While he is proud of his research, enjoys educating other caregivers and appreciates the recognition, Brindle’s true love and drive for nursing always goes back to the patient.

“We (nurses) leave every day recognizing that we’ve had a very hard day, we’ve had a long day, a challenging day,” Brindle said. “But we recognize that each and every day we impact somebody’s life and make it a little bit better.”