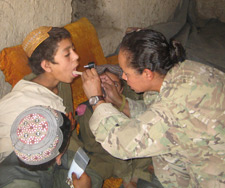 Elis Salamone (NP ’10) has experienced adventure beyond her imagination while serving the United States in the field of military nursing.

Elis Salamone (NP ’10) has experienced adventure beyond her imagination while serving the United States in the field of military nursing. She has spent 24 years completing various stateside and overseas assignments, including tours in Korea and England, as well as deployments to Germany and Afghanistan in support of Operation Iraqi and Enduring Freedom.

A member of the Air Force Nurse Corps since 1995, Salamone strives to improve the quality of life of those less fortunate than people here in the United States. She recently returned from an eight-month tour in Afghanistan, which she described as the most exciting tour out of all her years of serving in the military.

“This deployment has been very challenging professionally, and I have been grateful for my 20 years of nursing experience and my advance clinical skill class that I took while at VCU,” said Salamone. “I’ve used many of those skills while being deployed. “

Salamone is currently the Element Leader in charge of the Women’s Health Clinic at Peterson Air Force Base in Colorado Springs, Co., where she sees patients as a women’s health nurse practitioner. During her most recent deployment, she was the Officer in charge of the Female Treatment Team (FTT) at the firebase in Afghanistan. FTT ‘s mission is to provide local women with better access to medical care and health education.

“I saw patients on a daily basis in the camp clinic and we also did village medical outreach programs where we provided medical care and support to the villagers,” she said. “My daily routine varied on what was going on with missions, patients and day-to-day camp operations, such as air drops, distinguished visitors coming in or going to shuras (meetings) with key local elders.”

Salamone has cared for patients in trauma, primary care, pediatrics and women’s health while in Afghanistan. “I was basically the camp doctor and I’ve taken care of not only local nationals, but my team members and contractors on the camp,” she said.

The desire to take care of others was nurtured in Salamone by her mother. A native of Puerto Rico, Salamone was raised in a single family household with two younger sisters, while her mother worked two to three jobs while attending school to become a nurse. Her family moved to the United States in 1972.

“My mother raised her girls with the value that without education we would always be challenged in the U.S,” she said. “I grew up understanding the importance of education and hard work.”

Salamone started her nursing career as a nurse’s aid student during her junior year in high school and began working in home health and nursing homes directly after graduation. She enlisted in the Army on active duty in 1985. Following the completion of her active duty enlistment, she served in the Army Reserve before getting a direct commission in the Air Force in 1995. She graduated with a B.S.N. degree from Marymount University in 1994 at the same time her mother earned an AAS in nursing. “This has always been a highlight in our relationship,” she said.

Salamone later continued her education, obtaining a master’s degree in the women’s health nurse practitioner track at VCU, where she earned the Temple Memorial Award upon graduation in 2010. This award is given annually to a student in the master’s degree program who possesses characteristics that demonstrate exemplary performance as an advocate for the consumer of health care services in the profession of nursing.

“I’m very proud to be an alumnae of the graduate SON. During my time in graduate school I had great clinical rotations, wonderful caring professors and made life-long friends,” she said. “It was really a great experience.”

The women’s health NP program at VCU equipped her with the skills necessary for her current responsibilities, according to Salamone.

“My Women’s Health NP program was challenging and definitely prepared me for the real world of advanced practice nursing,” she said. “The advance skills class is the one class that really prepared me for deployment.

Salamone said once she retires from the Air Force, she aspires to teach at a university level and be part of a dynamic women’s health practice. She also hopes to conduct research studies on the health of military women.

“I’m interested in any studies that involve military women and how deployments affect their mental and physical health, “she said. “I also find adolescent female research interesting as this is a period of so much change and growth in human development.“

Salamone wants to inspire and provide guidance to future nurses, as past professors did for her.

“I think the advance practice arena is extremely exciting as new laws and governance continues to allow us to not only expand our practice, but impact health care by improving access in areas with limited medical care resources.” She said. “In particular military nursing is really making great advances with mentoring, education and training in these impoverished countries —improving their future is critical to improving the quality of life for these disadvantaged people.”