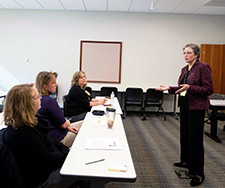 Dr. Deborah McGuire addresses questions from Ph.D. students prior to their class presentations.

The professorship is named after its benefactor, who served as a nursing arts instructor at the St. Philip School of Nursing from 1940 to 1943. St. Philip was a separate nursing school for African-American women at the Medical College of Virginia during racial segregation. Florence E. Elliott was an advocate for the nursing profession and believed in integration for students and faculty during her long career in teaching and administration. Before her death in 2004, she made numerous donations to the VCU School of Nursing over the years, including a special $100,000 gift that was used to establish the professorship.

“It’s an honor to be awarded the title of an inspirational leader who was a trailblazer in her field,” McGuire said.

“Dr. McGuire’s dedication to advancing nursing knowledge will build upon Ms. Elliott‘s ideals for our school and the nursing profession,” Giddens said.

Before joining VCU in August, McGuire served as a professor at the University of Maryland School of Nursing, where she led the Developing Center of Excellence in Palliative Care Research and collaborated on the P30 University of Maryland Center for Pain Studies. She has also served as the co-director and director of a six-year educational grant from the Maryland affiliate of Susan G. Komen for the Cure® designed to enhance nursing, social work, and pharmacy students’ awareness and knowledge of breast cancer.

McGuire said the reputation of the VCU School of Nursing, particularly its biobehavioral research, drew her to the university.

“VCU has a lot of resources to offer and it also possesses a unique culture because it encourages collaboration with professionals from different fields,” said McGuire, whose interdisciplinary clinical research focuses on pain assessment, cancer-related symptoms and oral complications of cancer therapy.

At the VCU School of Nursing, McGuire teaches experimental design and other topics to PhD students and mentors them in oncology and palliative care research, as well as conducting interdisciplinary clinical research.

She is currently the principal investigator of a four-year NINR-funded R01 intervention study titled Managing Acute Pain in Non-Communicative Palliative Care Patients (5 RO1NR0 13664.02.) The study tests a pain management intervention in non-communicative, critically ill, palliative care patients. McGuire is working with R.K. Elswick, Jr., Ph.D., a professor at VCU, who is serving as co-investigator on this study, and with an interdisciplinary group of researchers at the University of Maryland, Baltimore, School of Medicine. Their objective is to provide nurses and other health care providers with a systematic approach for assessing and managing pain in order to reduce the instances of under recognition and under treatment that often occur with patients who are unable to self-report. If successful, this research will provide a new way for nurses to manage pain in this vulnerable population.

“When a patient is unable to tell you how he or she feels subjectively, nurses are forced to be more objective when assessing pain. This research will allow us to develop a vital process that nurses can use to confidently and accurately treat and improve a patient’s outcome,” McGuire said.

In addition to her research and teaching duties, McGuire has been named interim associate dean of research at the VCU School of Nursing, effective Jan.1, 2014, as Debra Lyon, Ph.D., RN, FNP-BC, FNAP, FAAN, who currently serves in that role, is retiring.

A highly sought-after oncology and palliative care expert, McGuire has published in many journals and serves as president of the International Society of Oral Oncology. She is also a member of the Mucositis Leadership Group of the Multinational Association for Supportive Care in Cancer/International Society for Oral Oncology, the Oncology Nursing Society, the Hospice and Palliative Nurses Association, and numerous other organizations.