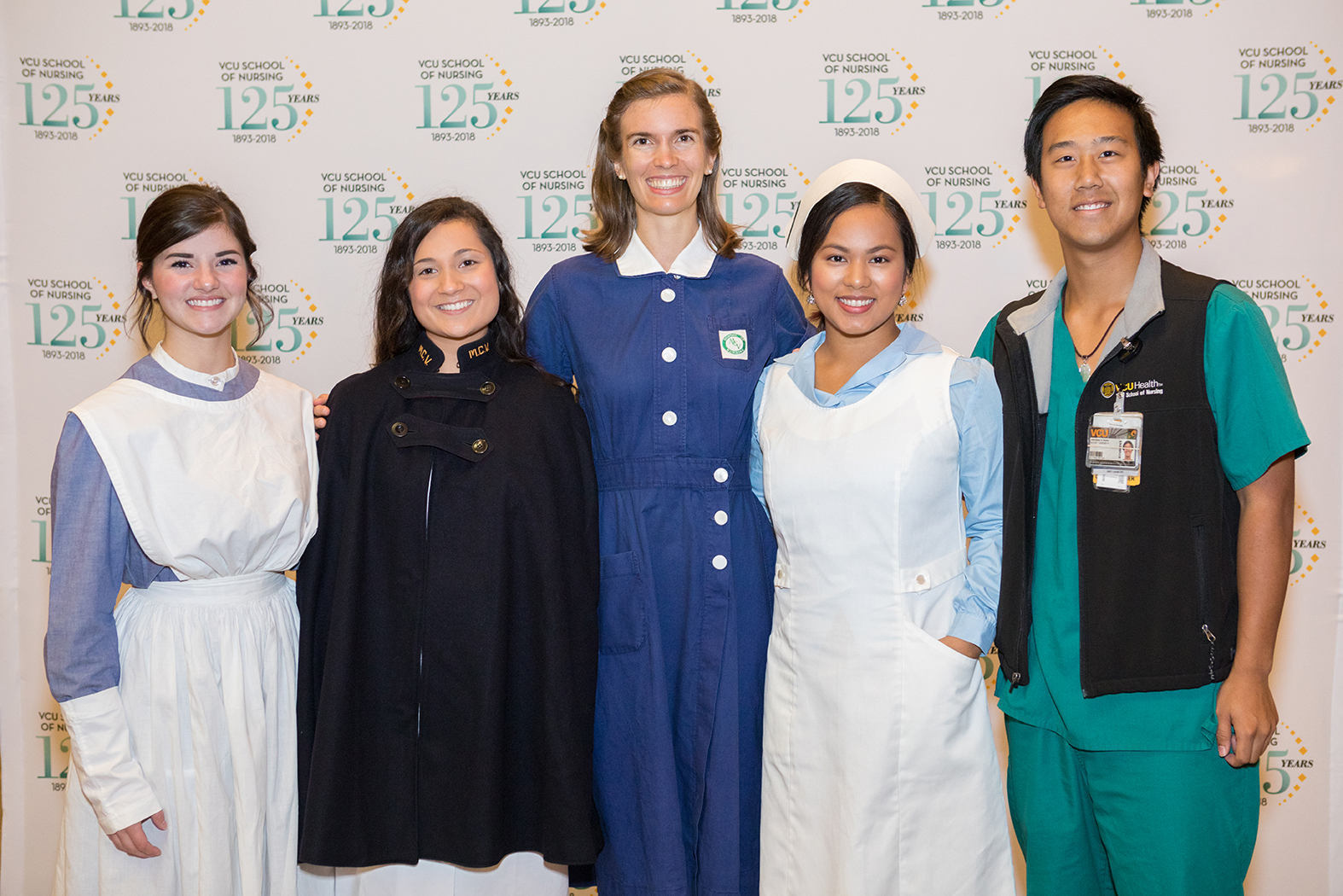 Students wore nursing uniforms from the past at the gala.

During the gala, Jean Giddens, Ph.D., RN, FAAN, dean and professor, shared reflections on what led to the school’s success.

“The School of Nursing has been influential from the beginning,” Giddens told gala attendees. “We’ve had a tremendous impact in nursing through the efforts and careers of our alumni and the efforts of our faculty and staff. The often-used metaphor dating back to the 12th century that we stand on the shoulders of giants truly applies here.”

Giddens, the Doris B. Yingling Endowed Chair, acknowledged her predecessor in the audience - retired Dean Nancy Langston, Ph.D., RN, FAAN - for leading the school through a significant period of growth for over 20 years. She also recognized partners, such as VCU Health System, and others for their work with the school.

Several VCU nursing students dressed in student uniforms from the past mingled with alumni and other guests during the gala. The oldest of the uniforms, a floor length white dress with a white bib, cuffs and gray chambray shirt, was worn by nursing students from 1895 to 1903.

A highlight of the gala included recognition of the newest members of the school’s Distinguished Cabaniss Society, named after VCU School of Nursing founder Sadie Heath Cabaniss. Membership consists of donors who have contributed $1,000 or more during the last fiscal year.  The following supporters who were present were recognized with a special Cabaniss plate: Patti and Mike Breen; Herb Griffith; Mildred Neagle (B.S.’69/N; M.S.’89/N; Cert.’06/N); Patricia Selig (M.S.’98/N; Cert.’03); Jacquelyn and Gerald Stone (Gerald was not present); Marcia and Harry Thalhimer; Tammy Williams (B.S.’88/N; M.S.’99/N; Cert.’01/N); and Christine Wynd.

Another gala highlight was a silent auction of two original artworks and one print donated by Baxter Perkinson, D.D.S., a past rector of VCU, community leader and avid watercolorist who donates his paintings to various philanthropies. The print is named "When Nursing Flowered" in honor of the school's 125th anniversary. Proceeds from the artworks went toward the VCU School of Nursing 125th Anniversary Scholarship.

Perkinson said he was inspired by the school’s history when naming the print, according to Giddens. The blooming flowers represent the maturation of the nursing profession and the VCU School of Nursing – from seedlings, to a plant and then to a mature, diverse and beautiful garden full of flowers that continue to bloom, she said.

“My commitment is to ensure this garden continues to thrive – so that our faculty and staff can be successful in their work – that our students are well prepared and highly sought after– and ultimately health care benefits from this work,” she said.

The school is still accepting donations for the 125th Anniversary Scholarship, aiming to raise $125,000 by the end of the year. From now through December 31, 2018, anyone who makes a donation of $50 or more to the 125th Anniversary Scholarship Fund can pick up a print of "When Nursing Flowered." To coordinate print pickup, please contact Amber Yancey at abyancey@vcu.edu or 804-828-2993.